Nachtdigital was a festival of vistas. From our own campsite, perched at the top of an incline at the edge of the treeline, we had a view of the field containing the ambient tent and the various installations that Ankali’s crew and some others had scattered throughout the field. You could just make out the main festival grounds beyond, the massive big top carnival tent jutting prominently into the air. Everywhere there was something to see, some installation attracting your gaze, some enigmatic glimpse of activity scintillating across the pond. A line of ravers being led in a blindfolded daisy chain across a field and into the woods. The enthusiastic din of karaoke breaking through the constant chorus of diffused basslines in a quiet moment. 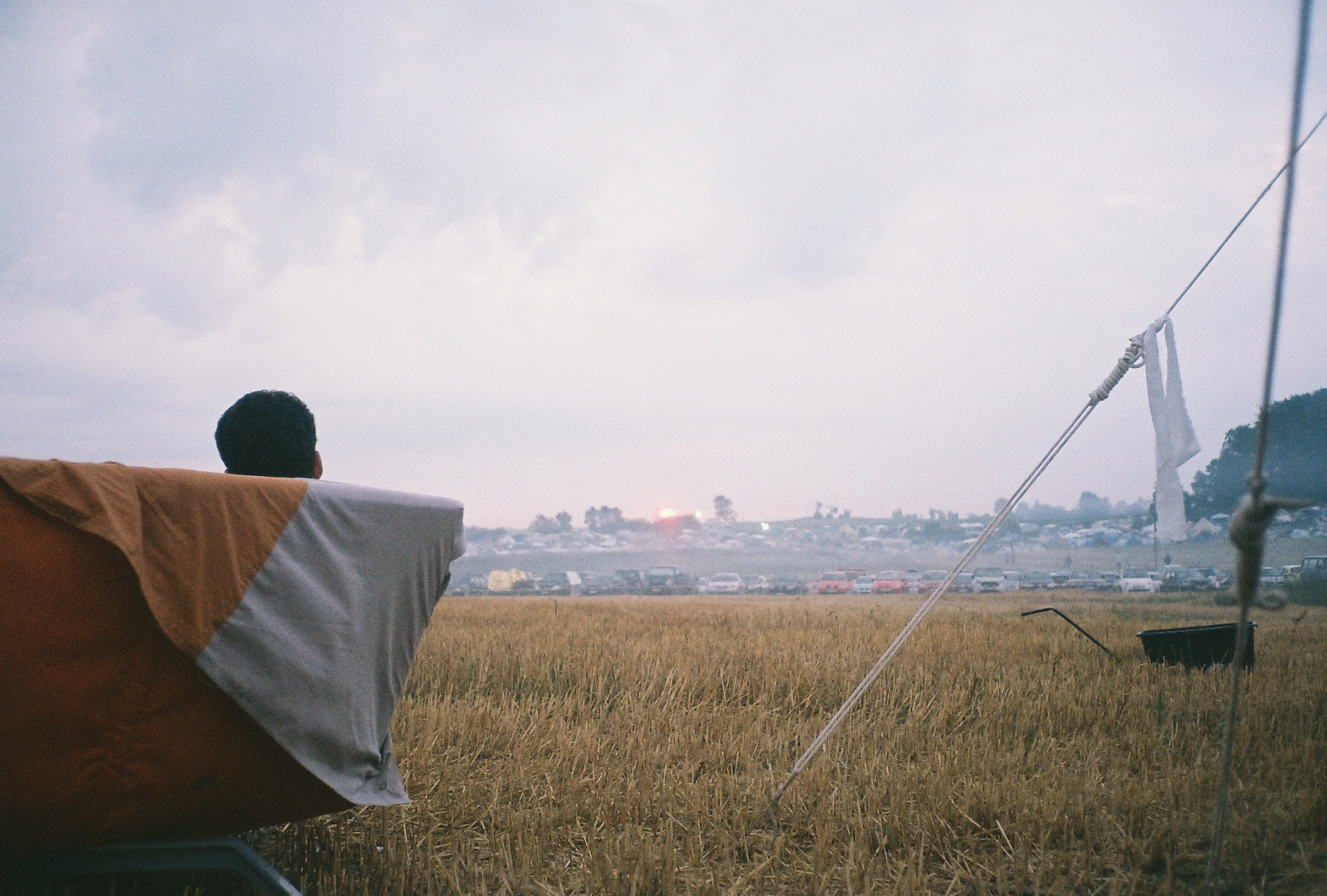 There was always something compelling just out of reach at Nachtdigital. More than any other festival I’ve been to I remember traveling from point to point. From vista to vista. The stages all played with this distance and separation. The beach stage in particular was complicated. Sandy beaches are tough to dance on until you’ve managed to flatten two points underneath your feet. Your footing is uncertain, and even then, the strain on your ankles to get to that point is grueling. The platforms at the back of the beach closer to the water afforded more stability, but the distance became more apparent in this way, staring at the backlit mass of bodies and forms before you.

If you have ever been there, you probably know the ‘dance floor’ in front of the main stage: soft sandy beach sloping towards the lake where the crowd usually dances uphill. I had this feeling of a long and slow ascent since the very first dance there. Rows of swaying and bouncing heads were rising in front of me. Usually when you climb somewhere it creates a build-up or some expectations. Of course, there were many climactic moments during the first night and the following morning. DJ So, Shed, Aleksi Perälä, Atom™ + Tobias, Dasha Rush and Job Jobse kept us climbing, falling for a moment and then climbing back again. Job was doing it maybe with too much of a brutal frequency with his ‘fuck-this-is-the-last-nachtdigital-ever’ selection, but I understand. Fuck, it was the last Nachtdigital ever. However, none of the changes and twists in dynamic of those DJ sets could match the change of the spatial dynamic, which happened Saturday in the afternoon. There were three smaller platforms sitting at the bottom of the beach, with three LED screens mounted as their backdrops. Each of them served as a stage for one performance only and I have been there for two. Janosch performed a playful and invigorating live set which I think attracted the attention and drew the crowd back to the beach and Steffen Bennemann and Polo made sure dancers stayed. It was the same beach, same sand and same soundsystem, but a totally different experience. LED screens flashing only red colors were a pleasant change to the colorful artillery of the big stage. You were dancing downhill now, seeing rows of dancers and sun’s last reflections on the surface of the lake. 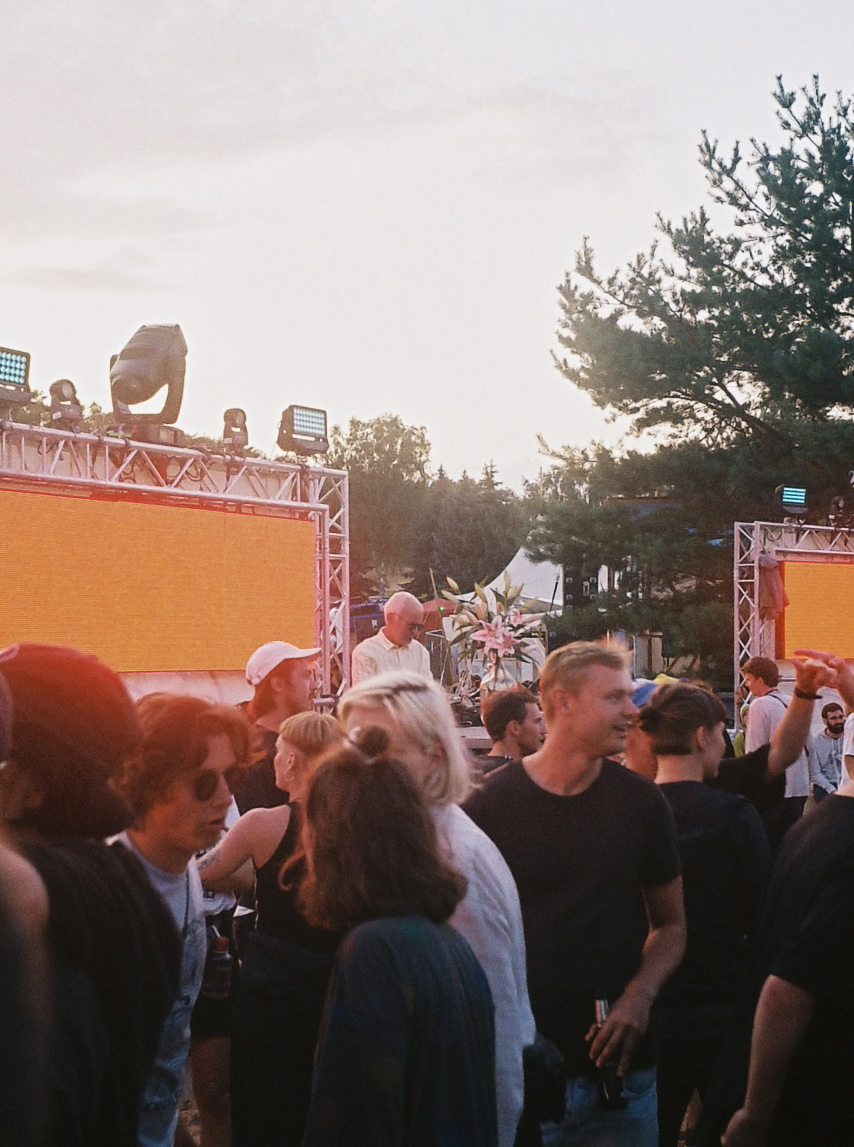 At some points, there was no other place to be at rather than the tent. Surrounded by sweaty faces, you could witness some of the highlights of the festival. On Friday, Marie Davidson gave a fierce and powerful performance, in what would be one of her last live hardware performances in a nightlife environment, before announcing it later that month. Tirelessly roaming around the stage, the Canadian artist sang between the clashes and metallic sounds coming from her keyboard and various machines, with the crowd to her feet. Her presence was still in the festival during the day, in a complete different way, when her hit ‘Work it’ made it through Gerd Janson’s set in a sea of smiles. 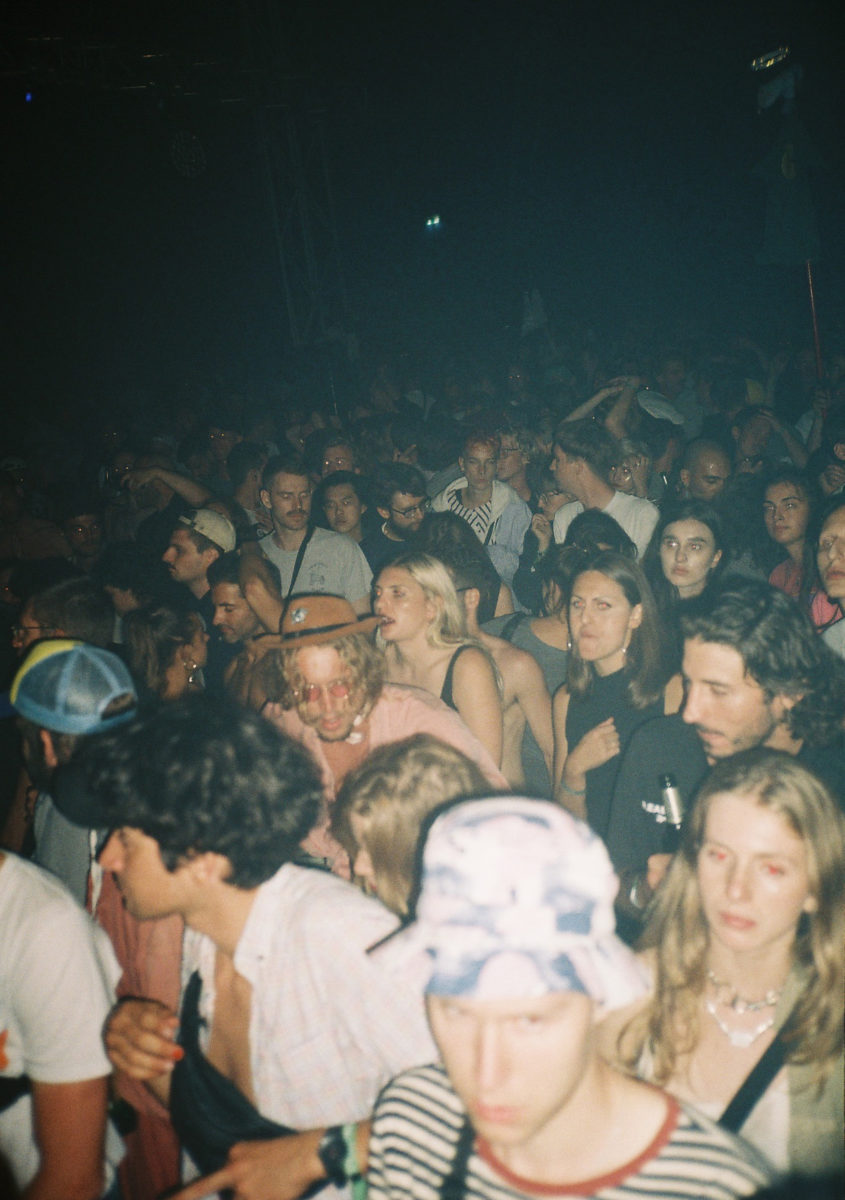 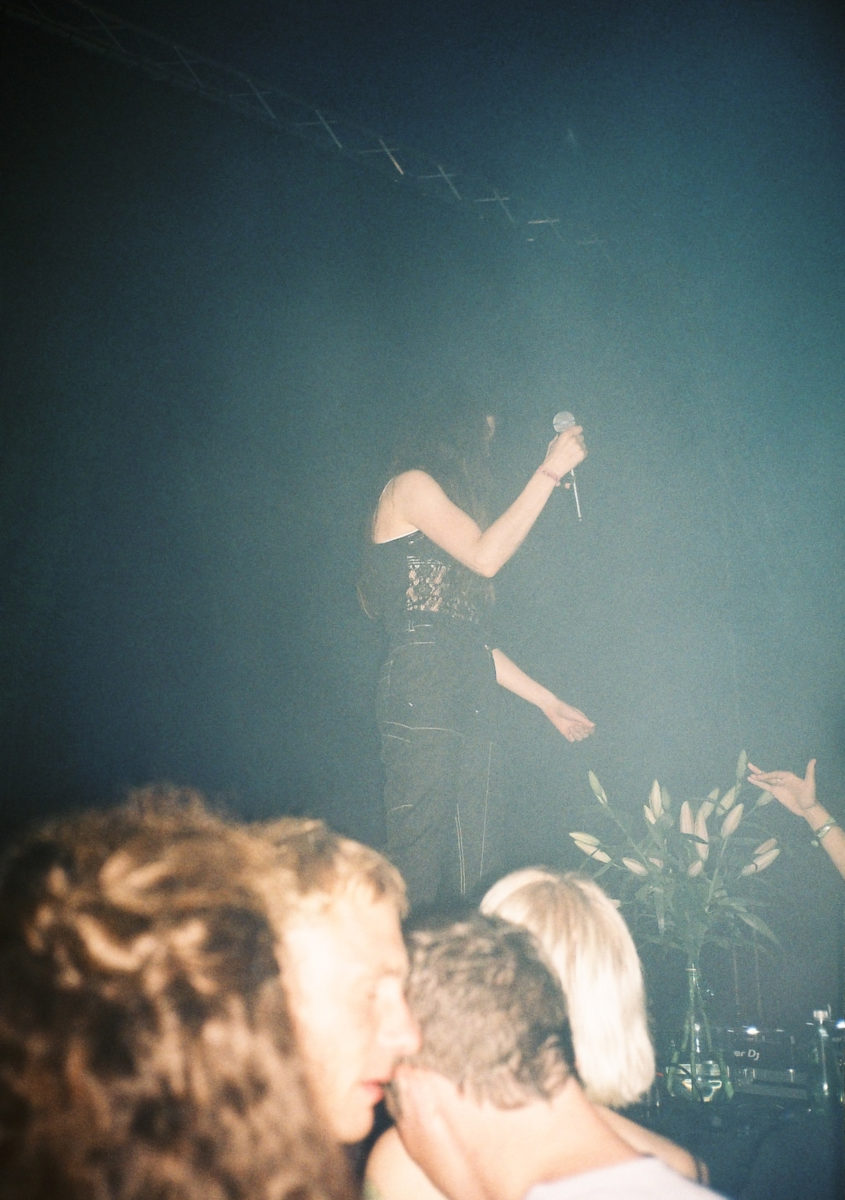 The day after, Credit 00 stole the show. Hunched over his gear, with his headsets hanging over his mouth serving as a microphone, he was swinging back and forth the stage, delivering an electrifying live set that didn’t put limits to the imagination. Starting off with the instrumental melody of the Fugees’ ‘Ready or Not’, the Rat Life Records label boss wove electro and dub sounds together by means of broken beats and his rugged vocals. The crowd, quite sparse for the first act inside of the tent on Saturday, was following with attention, waving with the music at first, to soon start jumping and pulling their arms in the air.

There was one moment at the festival where all of the individual elements coalesced. Gerd Janson’s set at the lake stage on Saturday afternoon brought everything together. Our campsite was a whirlwind of activity and preparation. Once our floaties were fully inflated everything became a buzz of activity, all feet and frenzied sprinting towards the lake. The queue through security was too long, arching all the way back around the edge of the lake itself. There was no time, we threw ourselves into the water on the opposite shore and swam all the way to the stage. We were greeted with Euphoric Dreams by Krystal Clear, and everything was smiles and warmth. Everyone was entirely present in this moment. I’ve never seen more direct interaction between ravers, everyone was fully there, exactly where they needed to be. Gerd closed his set with This Must Be The Place. Recognition flashed throughout the crowd, and I could only think “no way no way no way!” In this moment every uncertainty was washed away and there was no distance anymore. There was just the place, this was the place; warm water up to your knees and sunlight pouring down, more tangible than rain.

There was no time, we threw ourselves into the water on the opposite shore and swam all the way to the stage. 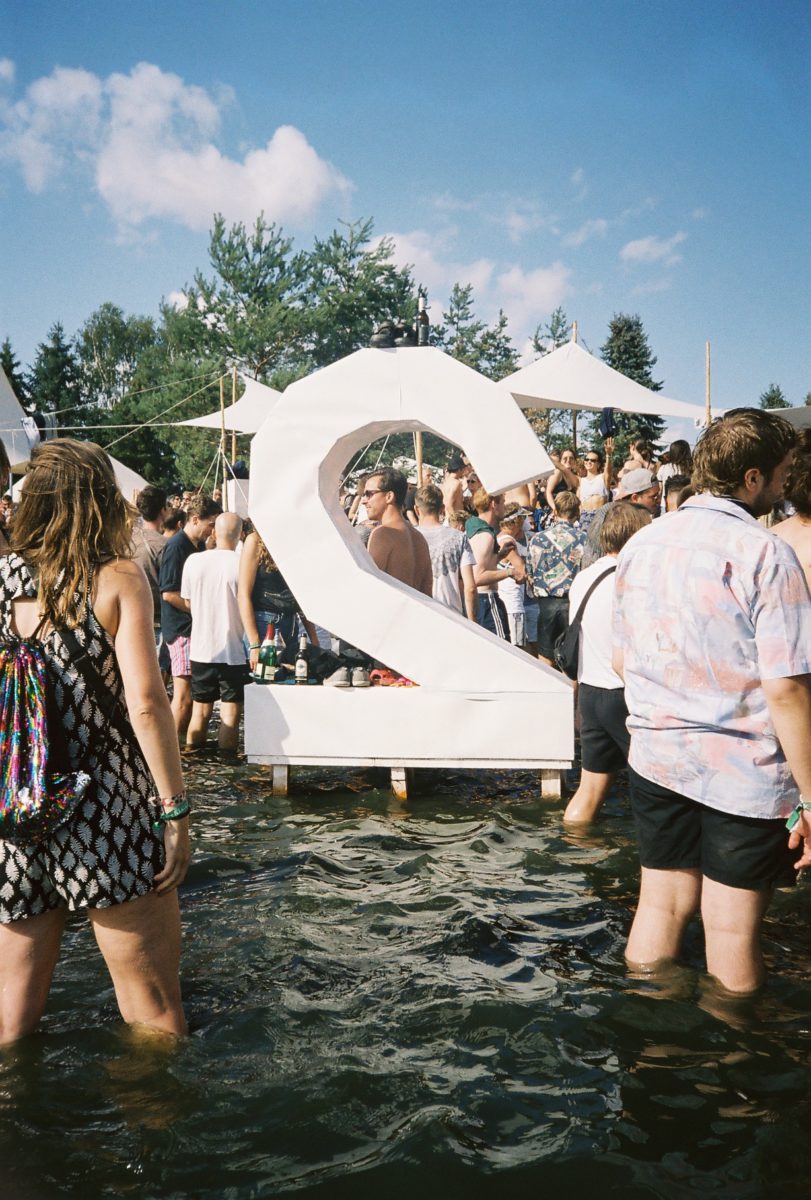 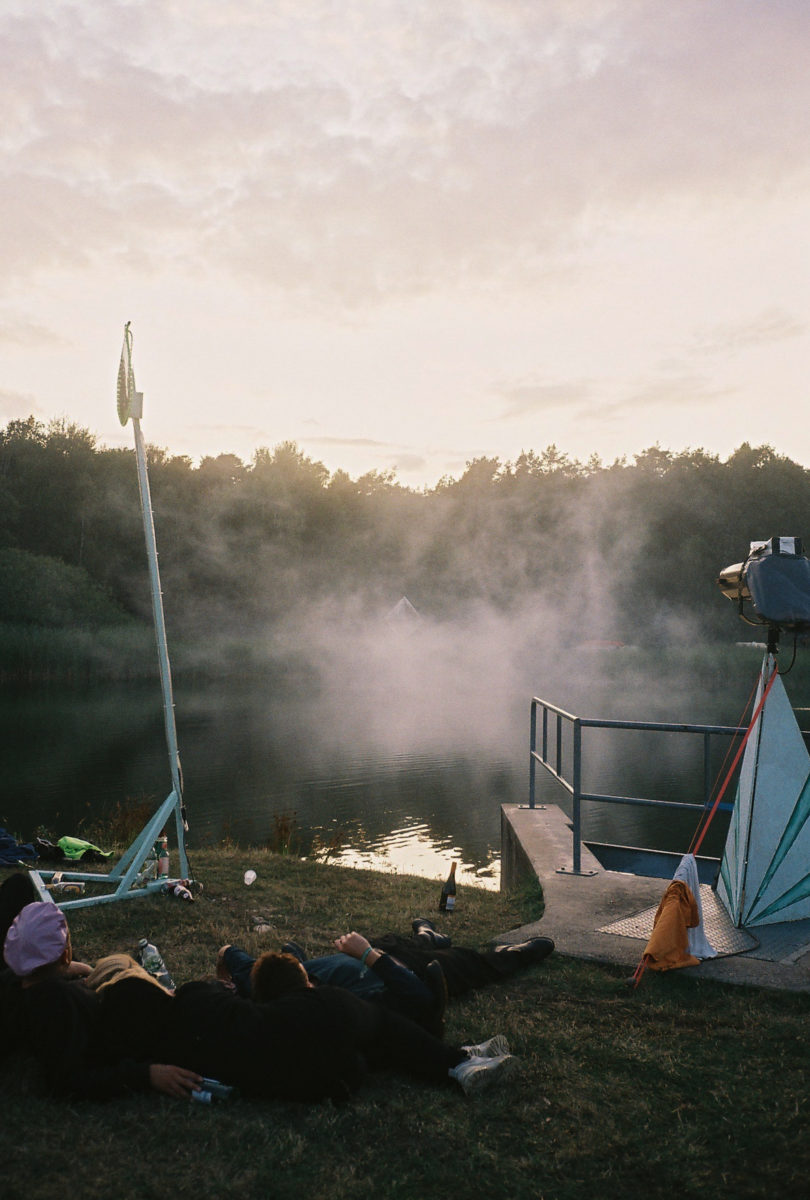 Walking towards the camping area to clear my head and get away from the relentless stream of music I suddenly hear an unexpected change in the mix from Inigo Kennedy who is about to hand the controls over to Helena Hauff. He brings in my favourite Aphex’s track Rhubarb. I notice this change from a waterside with the view at the crowd and the light-filled air above it. It feels like some invisible force has just sucked every sound, voice and dance move and created this serene vacuum instead. I even have to unclog my ears. It feels like looking at an Andreas Gursky rave photograph. The ease of this moment allows me to finally reflect on the festival itself. Pumping noises from the Tent are trying to pierce this beautiful vacuum but Rhubarb’s melodies keep them at bay. Then, an old noisy recording of a male voice gently takes over Rhubarb. It is a speech about humanity’s place in this universe and its loneliness, and it clicks so well. I think those big all-encompassing words might have been president Carter’s message to the extra-terrestrial civilizations which he had sent to the outer space on the Voyager spacecraft. Or something else and very similar, I am not so sure anymore. I thought I would ask the Nachti Music Facebook group, but maybe I want to keep as I remember it. 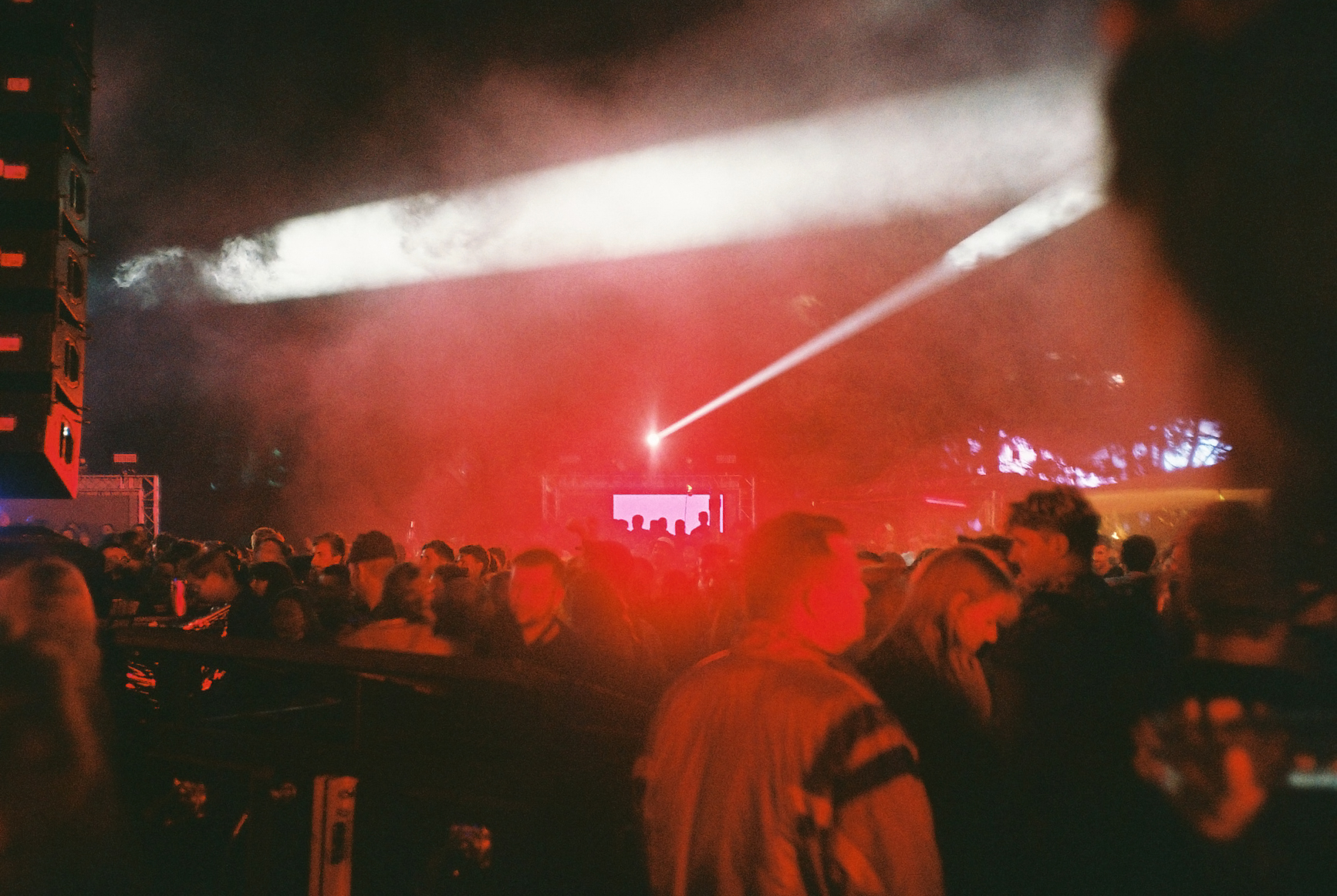 There was, in the end, a tangible yet uncertain sense of family and community. Perhaps it was my own inattention, the experiences of the previous nights catching up to me, or my own impending departure looming, but one of the most striking moments of this was something entirely outside the programming of the festival. There were two families of birds: Two swans and their bevy of teen fledglings, and some coots with their young cohort paddling around in the lake. I can only imagine what must be going through their avian brains. Had they come for the music as well? Were they repulsed or attracted by these frequencies. I thought back on new years 2019, I stood with my partner at the top of Letna staring out at the fireworks erupting over the city, a 360 degree view of rampant celebration. In the middle of it all, a group of birds huddled close together in a dense pack in the middle of the Vltava. No doubt traumatized by the surrounding revelry, no doubt terrified of the aerial explosions locking them out of the sky. To a bird, fireworks must seem more like flak clouds. But those two families of birds kept coming back. They became more familiar than many of the faces around me that weekend.

Knowing when to finish something, to end doing something which is important to you, is a valuable self-reflective quality. It is even harder to find the right time, when the thing you are doing is successful and everyone loves it. The last set of nostalgic goodbye tunes played at the festival on Sunday evening by the two founders of the event was a little bit awkward but also the most on point decision Nachtdigital deserved. The size and the energy of the crowd assured me of that and the very last minutes of the set assured me that organizers’ decision to call it a day was a difficult, heart-breaking and maybe at first not so rewarding, but a decision well aforethought and mature. They played Power Of Love twice in a row as a solution to persistent crowd wanting more and their own verdict, that the song would be the last one sounding at the festival. And I think this gesture’s power was even bigger and more clear than the song itself. 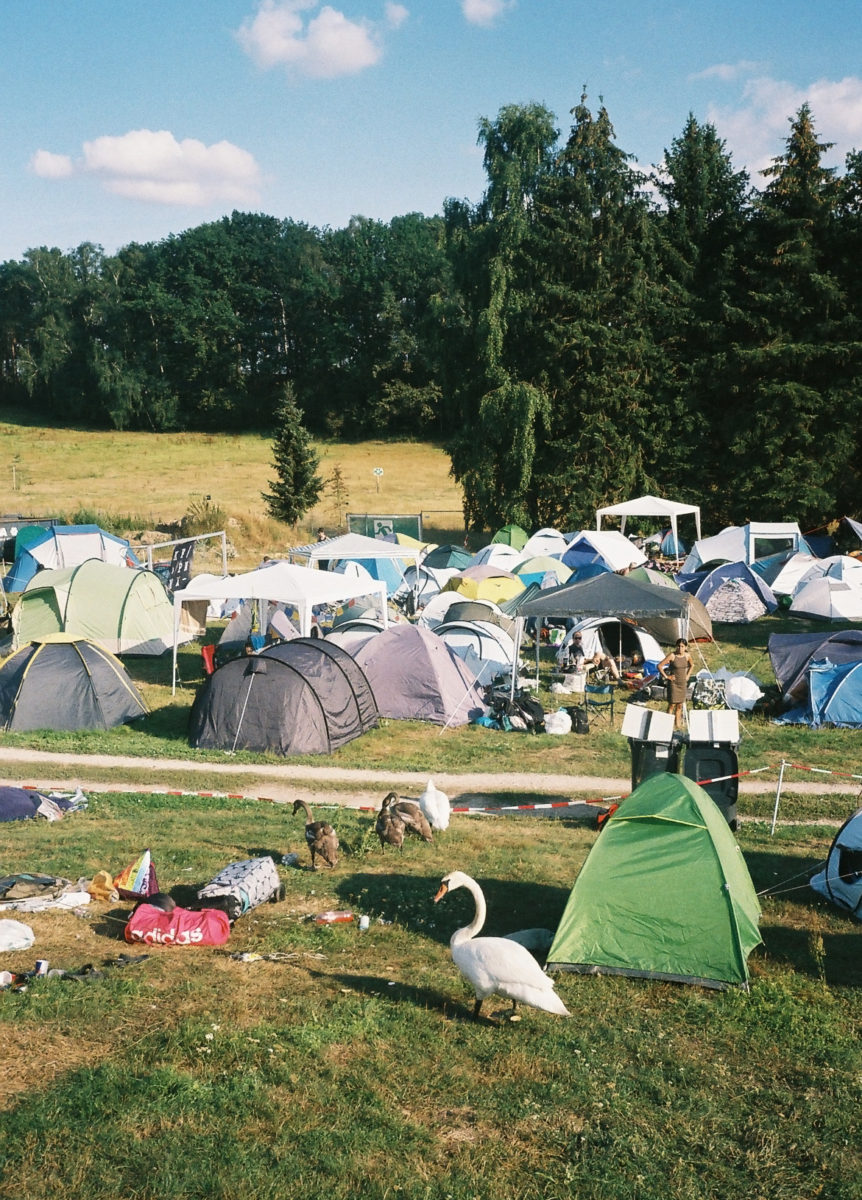 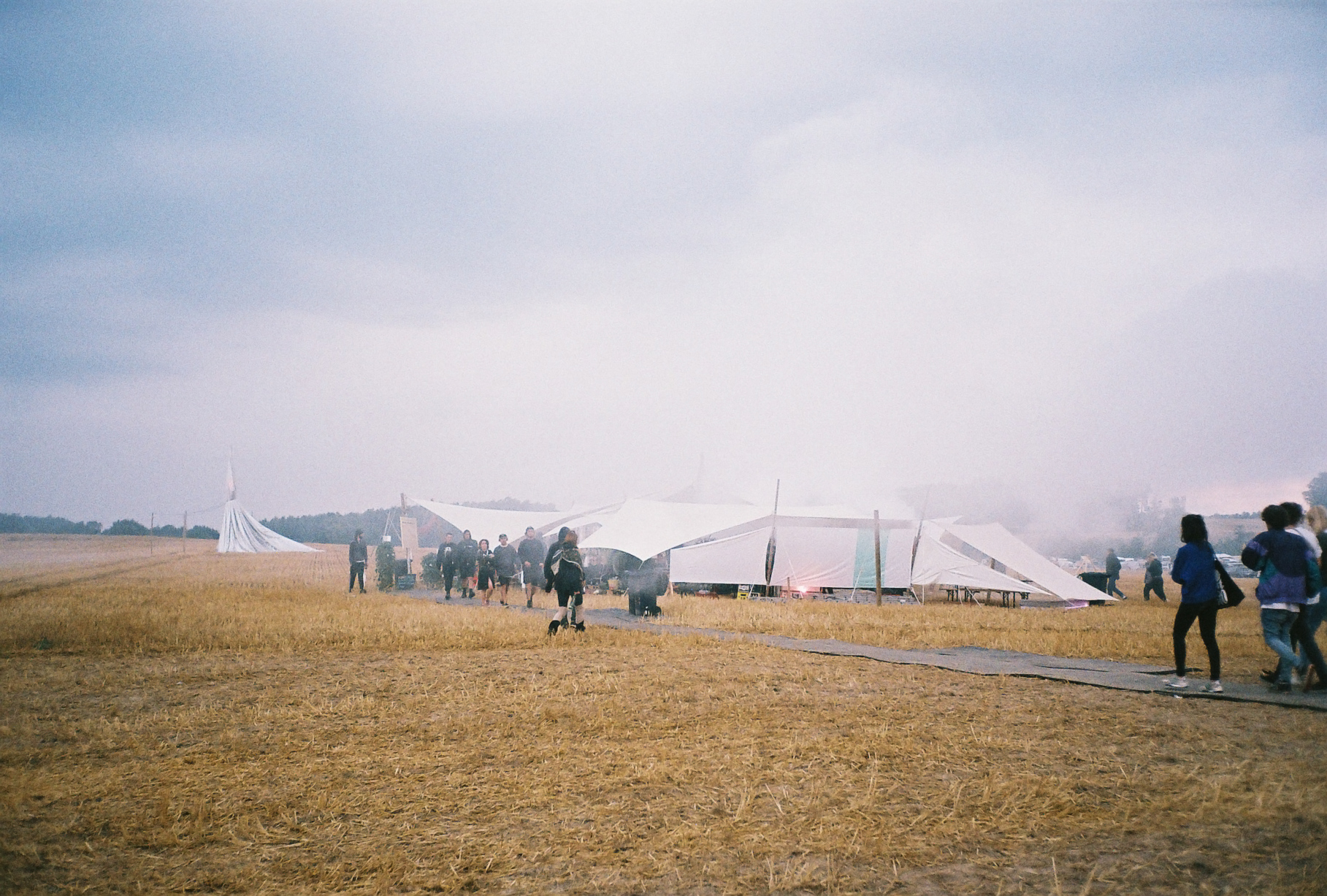 On Sunday, at the very end of the festival, some of us shied away from the crowd that was bouncing near the lake to the final set by the Nachtdigital crew, and stayed up in the golden hill where the Ambient stage was placed. Once again, as it had been throughout the whole happening, it was an oasis of calm where any lost soul could wander around to rest the feet, and the head. Well after the music was finished, Sinnan and Hoff were still jamming, sitting in a sofa, slowing down the evening to the beat of a smooth and delicate selection. Once the music down in the festival was over, there was a slow pilgrimage up to that hill. People were walking in languidly, refusing to accept the event was already over, taking sips of the last remaining beats of the weekend.

Laying down in a carpet, their eyes closed. I wonder what went through their minds, or whether there was anything at all, except for the music. It calmed all the beasts and the demons, swinging to one side and the other, or following the music with their feet in the air. They all stayed there for a while, even after this was over. Some of them were stretching, others fell asleep.  Some were simply watching the air move pieces of cloth hanging next to the stage. Traces of conversation were floating through the air, really weakly, as to prevent breaking the sudden peace that took over the place. It was really over. Nachtdigital, in its final edition, proved once more to be far beyond a music festival. It was about the contagious smiles and the sempiternal giggles. About connection with no signal. 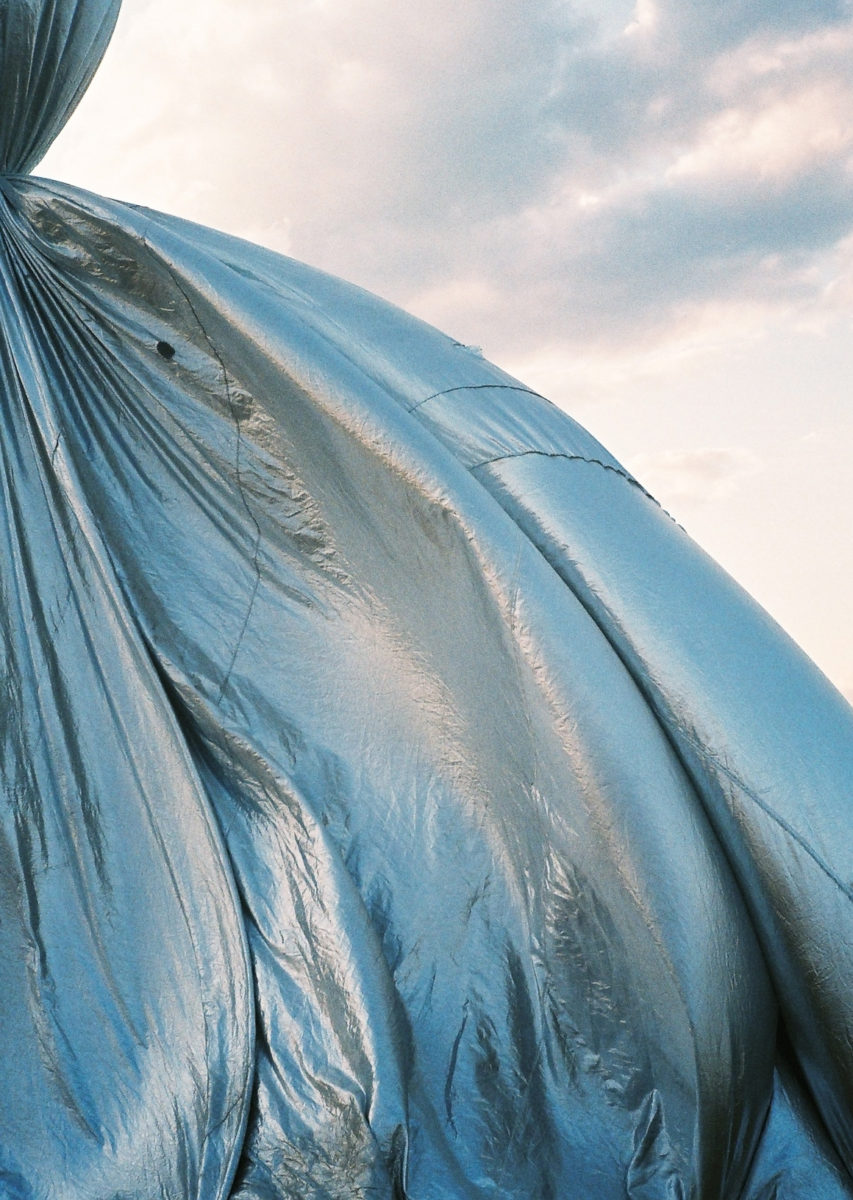 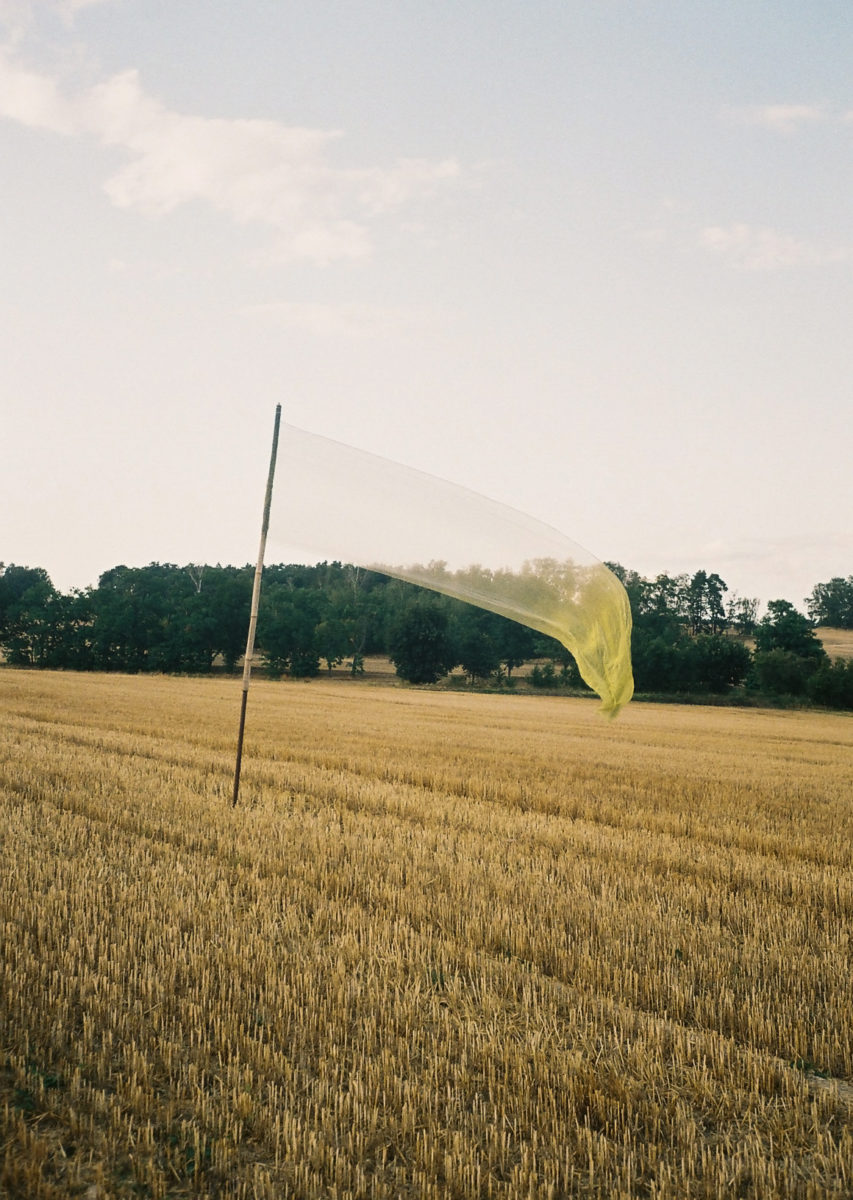 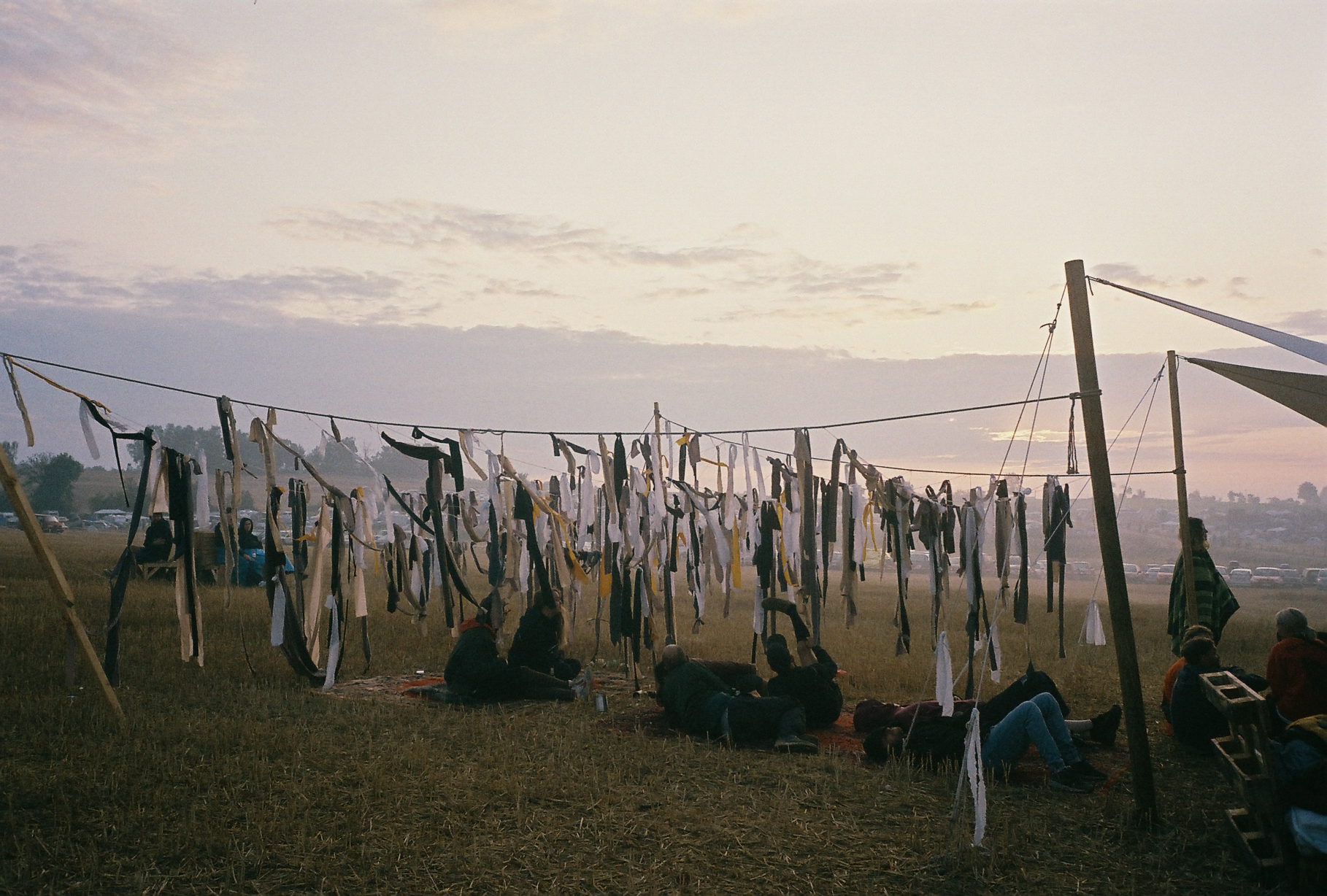