Lizard 1: I mean to be honest I’m kind of into this confinement thing because I feel like I’ve been fantasizing about not having any plans and just having to stay home and do things I never have time to do and also work and make music and listen to music and, just like not have any obligations or any plans that I wanna cancel, um…so in a fucked up way I’m…I’m loving this.

Lizard 2: That’s such a quarantine week 1 thing to say…

The internet changed beyond recognition. And so far, it seems really hard to say what it actually means. All this happened just during the last couple of weeks, which for some might have felt like hours, in the meanwhile, for others, like painfully endless years. Before we used the layered, intertwined, merging yet divergent plains and streams of the network as a place of work, occasionally to order food when being really lazy, sometimes we read, followed all the new memes or carefully constructed our digital egos and alter-egos and at the same time kept arguing about politics. Now, we basically moved in. With all we have. And all we have to offer.

Our daily experiences so strongly connected with the physical presence in real tangible spaces went all virtual. For years we’ve been talking about the total merger of the two. What a surprise to realize that keeping your schedule of daily meetings, only transferred into Zoom or FaceTime video calls, is actually a completely different experience and a harrowing one at best.

This is a text about contemporary art, more or less. Therefore, let’s talk about art. Galleries and museums went berserk in a chase to provide online representations of their shows, lectures, panel discussions, or educational workshops. The whole museum collections were quickly digitized into virtual tours. Insta livestreams of artist talks or guided tours through shows which were already supposed to end or which never actually opened the doors to their visitors are provided on a regular basis in unprecedented quantities. All of this for free. Well, almost. (I mean, if you can afford a phone or a computer, with fast broadband connection and if you have time and space to use them for infotainment). 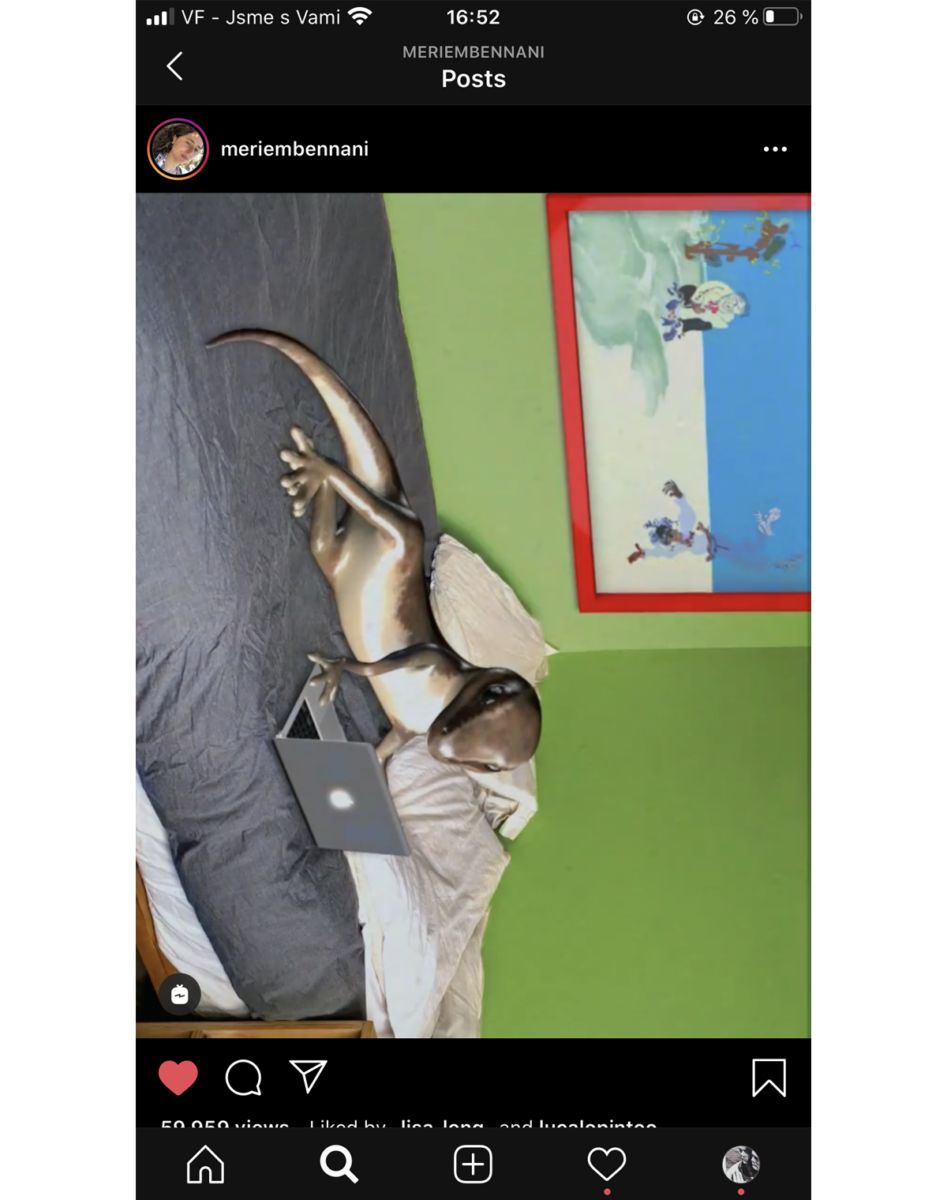 Quickly risen out of necessity, the novelty of this seemingly democratic “quality internet” is exceptionally intriguing and tempting for exploration. At the same time, it also shows many limits of its current state. All that suddenly enriched available content is far from the cyber dreams of utopian builders of the network back in the late 80s and 90s. But if we stay in the given context, the context of cultural workers from privileged environments (who are most probably the readers of this platform) there is also a limit to what can or could be truly translatable to digital formats. Individual experiences are just far too complex to be accessed through a smooth polished surface of a screen (or the one covered in remnants of your delivered food and body fluids for that matter). Same as sharing a dance floor vibrating with the energy of anonymous, familiar, or intimately close human beings can’t be experienced in a void, most of the art forms are but mere shells of their original meaning and potency while seen online.

Lizard 1: You know who’s best at quarantine though?

Lizard 1: Because it’s kinda like it’s their life anyway, they can’t go outside, they can’t really…do stuff…like…Basically go outside.

Lizard 1: Yeah, this is the life of a celebrity. 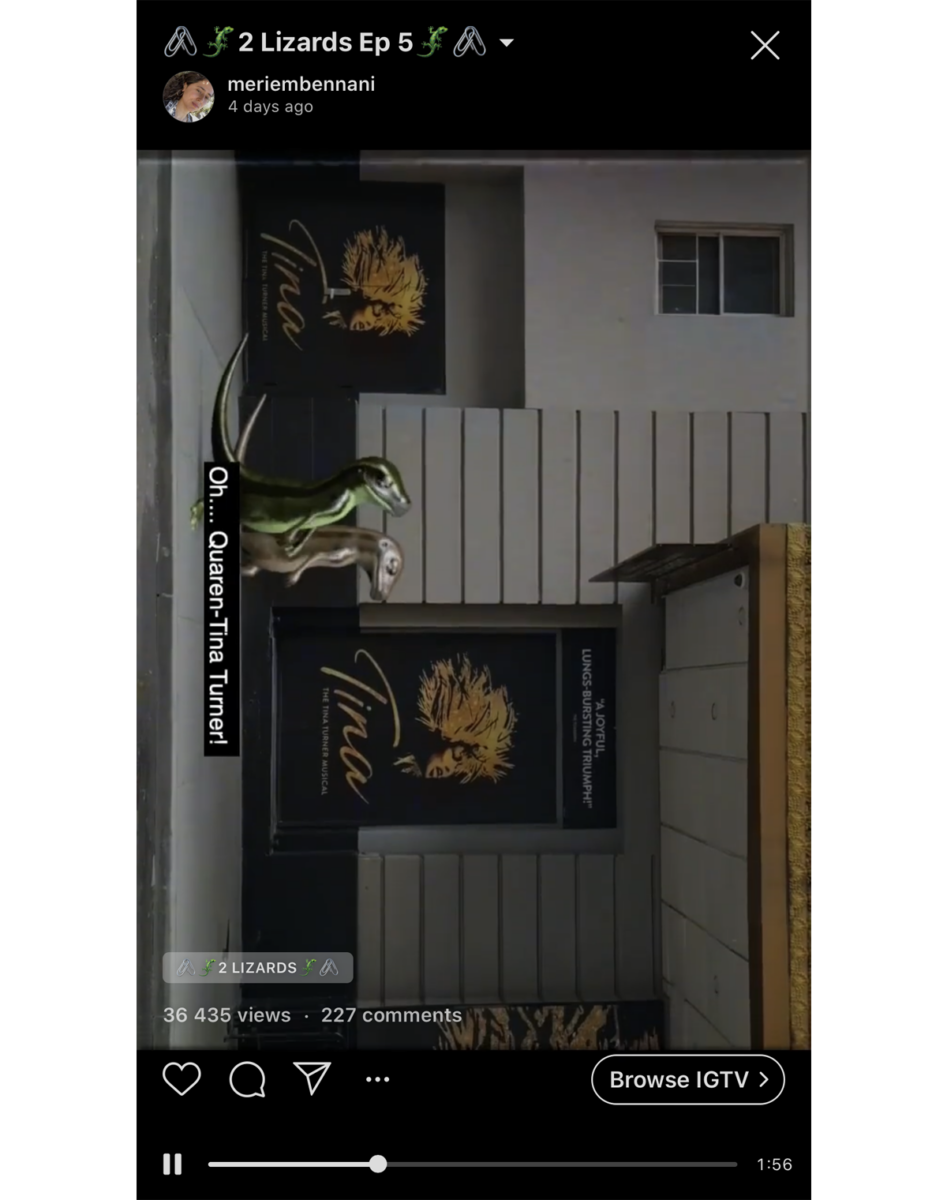 Hamburger Bahnhof, Museum for the Present, part of the Berlin National Gallery, hosts already for 20 years an exhibition and event program “Musikwerke Bildender Künstler” (Works of Music by Visual Artists). The project was originally initiated by an association Freunde Guter Musik Berlin, when it was invited to conceptualize an accompanying program for the exhibition “Der Hang zum Gesamtkunstwerk”, curated by the only, the legend, the father of contemporary curating Harald Szeemann. In the late 90s, Freunde followed up on the previous collaboration with the Berlin National Gallery and started their long term project openly anchored around fringes of otherwise, and especially at that time, two respective creative fields, that of music and visual arts. A transdisciplinary bridge they formed seems natural or almost obvious right now. Yet, back then, the majority of artists still perceived their oeuvres with a dominance of one specific medium of expression, be it painting, sculpture, conceptual art or other historically grounded creative framework.

During their long run, Freunde and the National Gallery presented a wide variety of artists, both already established or emerging, who mostly, later on, became integral parts of the artistic Olympus…or Valhalla…I mean…Nirvana, depends on which one of those you prefer. People like Hanne Darboven, Lawrence Weiner with Peter Gordon, Carsten Nicolai AKA Alva Noto, Cory Arcangel, Janet Cardiff & George Bures Miller, Susan Philipsz, or Jorinde Voigt all showed how close to each other, or even totally merged visual and audio expressions could be. At the same time, the series could serve in its entirety as an art historical probe into these tendencies – forming a narrative of abstraction, invisible sensations and total immersion. 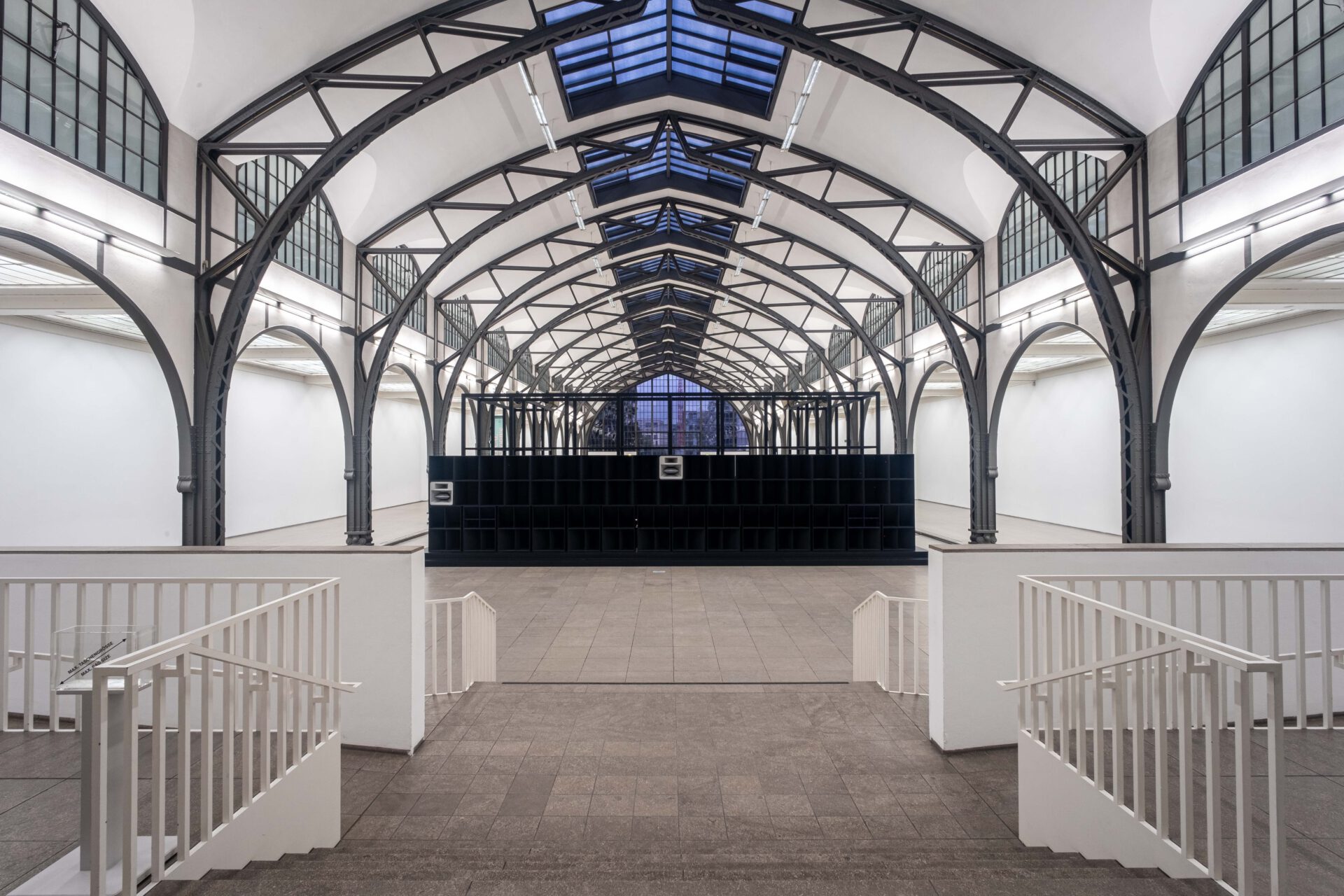 The latest project of the series was presented at the end of 2019. Turkish artist Cevdet Erek took over the monumental historical hall of the former train station with his work “Bergama Stereo”. Bergama stands for the current name for the ancient Greek city of Pergamon. From the ruins of its Greek temples, German engineer Carl Humann elevated the acclaimed Pergamon Altar in the late 19th century and brought it to Berlin. This is, of course, a story of imperialism and colonization. At that time, the newly unified German Empire felt left behind in terms of cultural capital, especially in comparison to the ferocious Brits. Their museums were overflowing with historical artifacts from all over the place, and the Germans felt the need to show off the extent of the power at hand this way too. Therefore they financed a costly endeavor to search for all still buried pieces of the Altar, bring it across Europe and even build a new museum for it at the Berlin’s Museumsinsel. After couple of years, the Altar was moved by Nazis to the safety of an underground bunker, then discovered by soviets and taken to Hermitage in Leningrad, only to be returned to East Berlin in the late 50s. 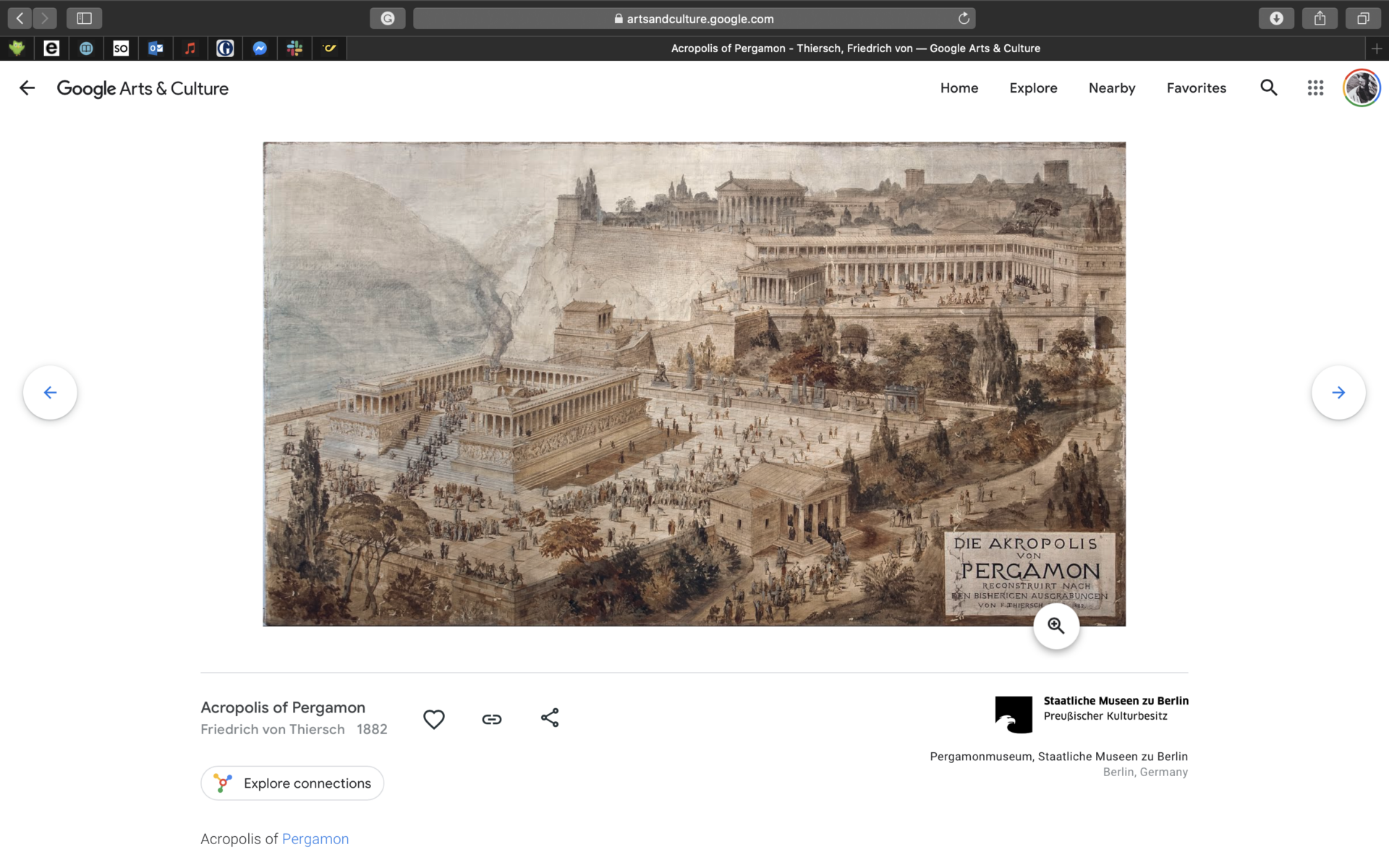 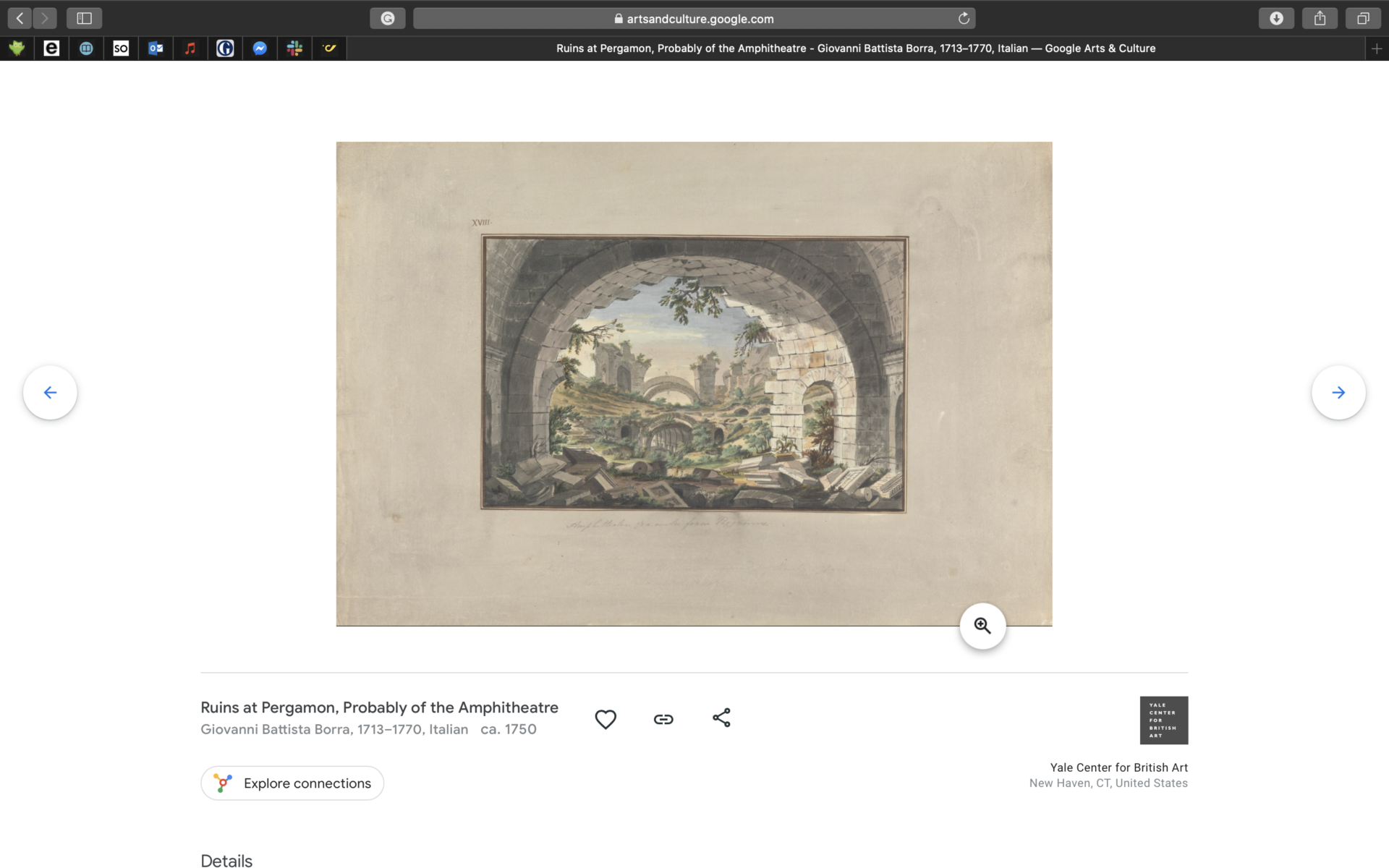 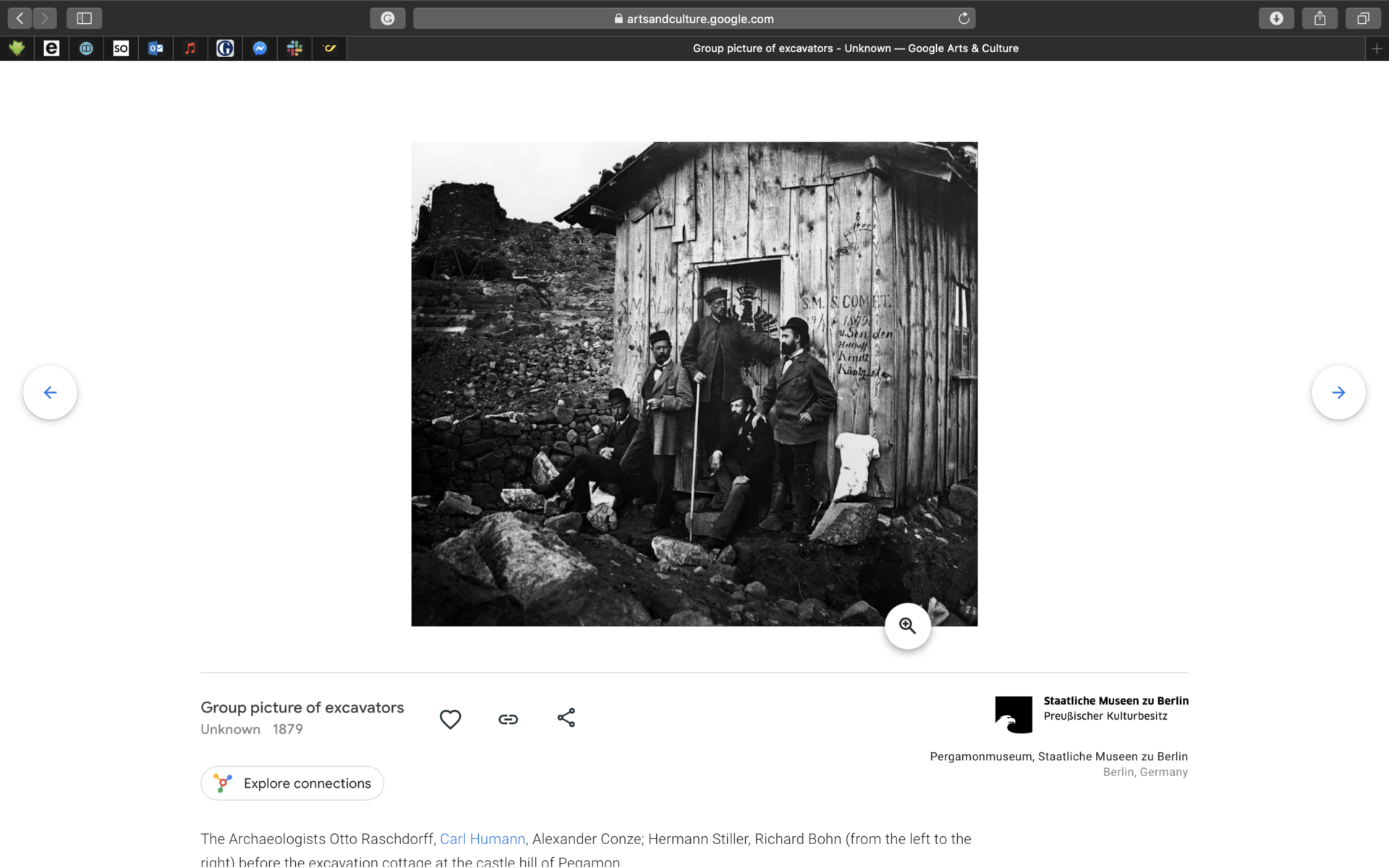 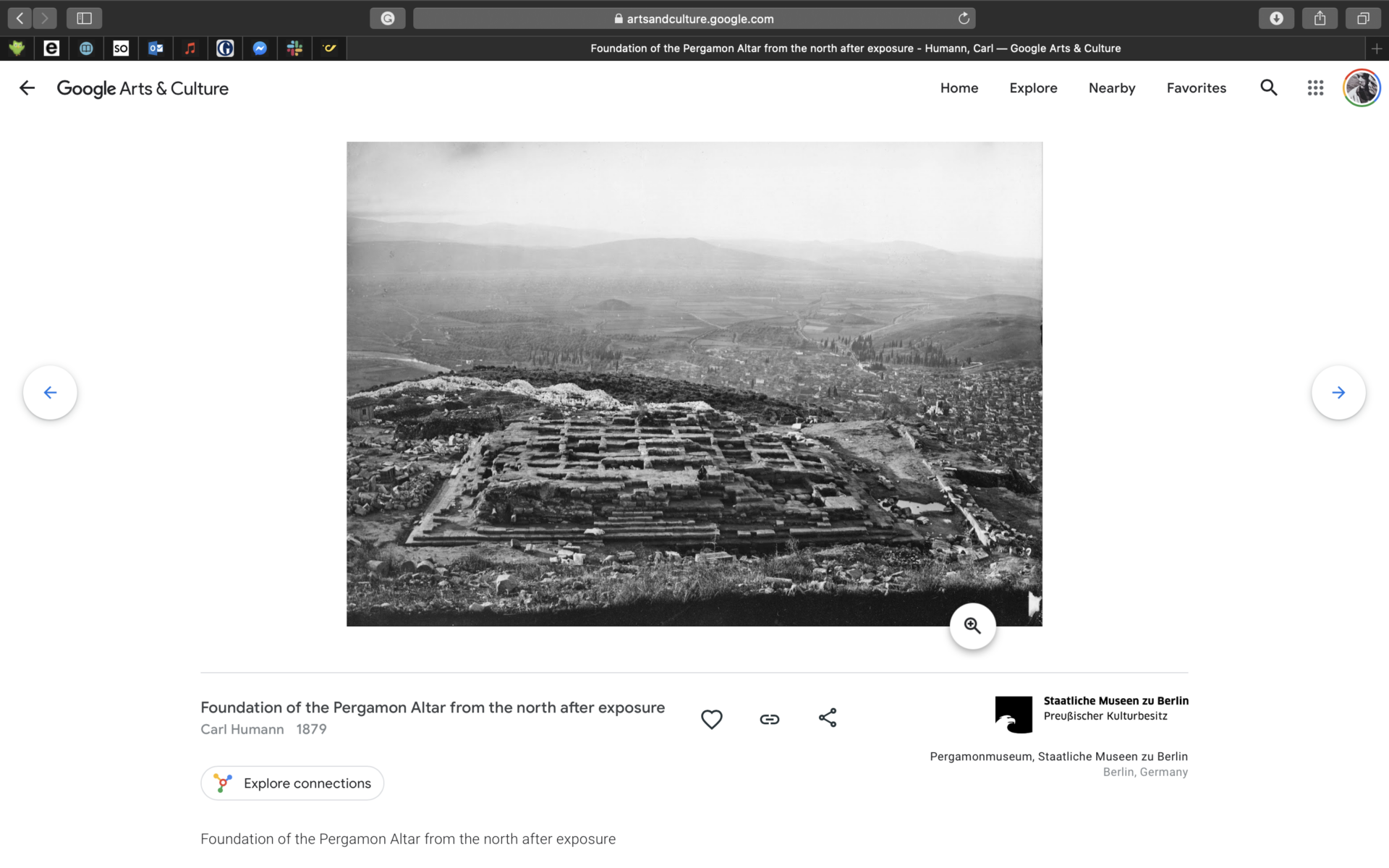 Right now, the whole Pergamon Museum is undergoing a major reconstruction and will be reopened to the public in a couple of years. That is one of the reasons why Cevdet Erek constructed his own scaled version of the Altar for Hamburger Bahnhof. Erek’s Altar is not an ancient-looking monument, but an abstracted form, resembling a music stage. The original Altar is famous for its grand frieze, preserved only in fragments, depicting scenes from the battle between the Olympian gods and Underground Giants. Erek, in his version, replaced the frieze with a belt of loudspeakers, with some dummies in between to relate to the fragmentary character of the current state of the frieze. With 34 sound channels, the physical piece, even though small in size compared to the grandeur of the historical hall, literally fills every single inch of it. With the sound, of course. 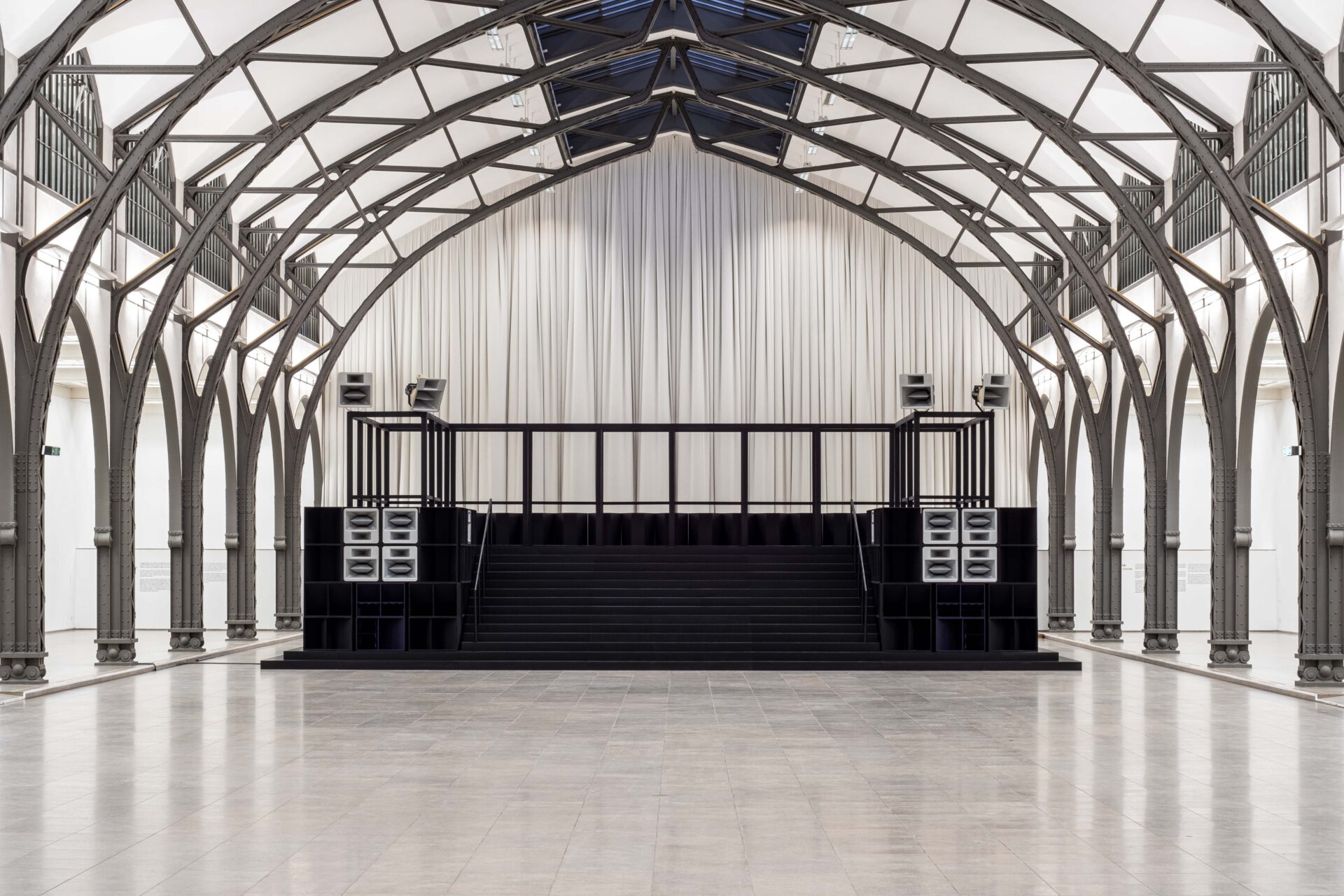 Visitors can spend literally endless hours moving around the space, coming closer or further away from the source of the sound, an experience that radically changes its qualities. The distinct channels are either synchronizing or separating to individual sounds, depending on your position. The actual music is referencing Berlin’s club culture with the long history of electronic music, same as going much deeper into ancient musical instruments like bass drum davul used in the Middle East for ages or dance rhythms from the area of Bergama. The work opens up a plethora of possible critical standpoints, from the de-colonial discourse, through history of music from ancient dances to clubbing, relations between former “East” and “West” and all that of course relating to our here and now; new populistic nationalism and all other fucked up shit happening around. Should the Altar be returned to the present day Turkey? Are we again living in times of authoritarian states showing off in the field of international politics with stolen goods and artifacts? What’s the link between…let’s say, Steve Reich and Dopplereffekt? Where can I get drugs tonight? Am I hungry? If the work gives us something specifically, it is time to think. Considering that you had some at the first place to go to a museum.

Lizard 2: Everyone is becoming a chef during this quarantine.

Lizard 1: Wow, yeah! Everyone is gonna be either a chef or a dancer by the time it’s over.

Lizard 1: The world will never be the same. 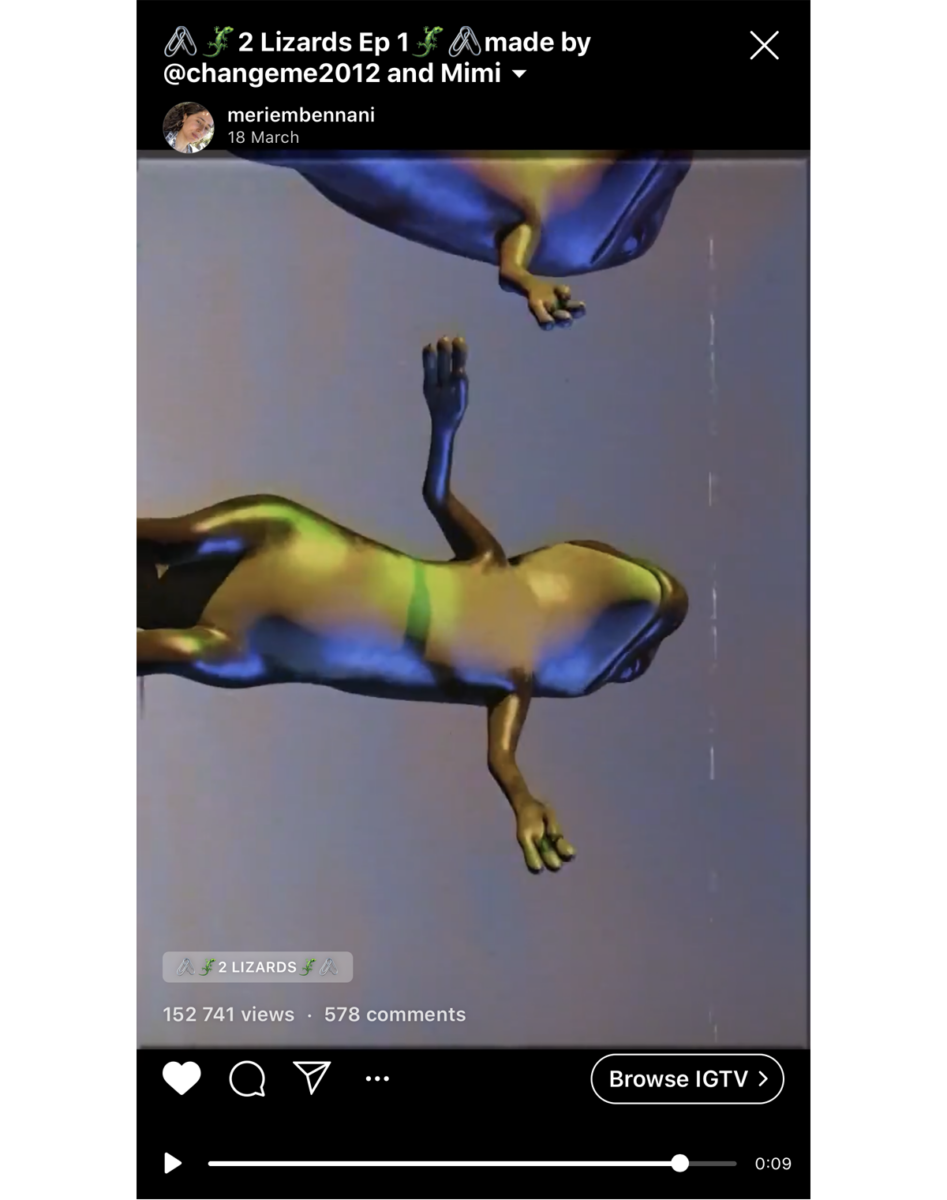 I guess the internet will explode by the time this ends. And still, it won’t manage more than just stream Tiger King back and forth over and over again. A prospect to translate an experience of spatial highly site-specific and all types of sensations encompassing experience from an exhibition will remain unattainable. Who knows, the Chinese want to create through Huawei a new internet infrastructure, saying that the current one can’t keep up with the growing demand and pace of data consumption. Their internet would be, of course, like 1984 on speed. The “West” is trying to catch up and evolve something functional faster. Newly re-configured “virtual-space race” is on full throttle. But I guess we have to wait for proper Black Mirror VR contact lenses or something of a sort to approach art differently than in a physical form. Who cares for a stupid digital 5-hours long Hermitage Museum walkthrough? Google Street View walks feel like miraculous experiences when compared. Let’s wait, let’s listen to music and watch films till then, nothing more makes sense. And when all this is over, and the first flight to Paris takes off, go directly to Centre Pompidou to see Jeremy Shaw’s Phase Shifting Index. If it’s still gonna be open at that unpredictable moment somewhere in the time ahead of us. That’s a work you just can’t even describe in words. Or maybe…

Lizard 1: What are you watching?

*  The dialogs between “2 lizards” come from the new eponymous short video series by Moroccan/American artist Meriem Bennani, you can watch all of them on her instagram.